A common human polymorphism in the gene that encodes brain derived neurotrophic factor (BDNF), Val66Met, is considered a marker of vulnerability for mental health issues and has been associated with cognitive impairment. An alternate framework has been proposed in which “risk alleles” are reinterpreted as “plasticity alleles” that confer vulnerability in adverse environments and positive effects in neutral or positive environments (Belsky et al., 2009). These frameworks produce divergent predictions for tests of learning and cognitive flexibility. Here, we examined multiple aspects of learning and cognitive flexibility in a relatively new BDNF Val66Met mouse model (BDNF Val68Met, Warnault et al., 2016), including multiple choice discrimination and reversal, go/no-go learning and reversal, and appetitive extinction learning. We found that mice homozygous for the Met allele show more efficient reversal learning in two different paradigms, but learn at rates comparable to Val homozygotes on the multiple choice discrimination task, a go/no-go task, and in appetitive extinction. Our results dissociate reversal performance from go/no-go learning and appetitive extinction and support the plasticity allele framework that suggests BDNF Met carriers are potentially more sensitive to changes in the environment.

Mice engineered to mimic a common Val66Met polymorphism in the BDNF gene show greater sensitivity to reversal in environmental contingencieswebmatr0n2019-02-02T21:38:12+00:00

Rules encompass cue-action-outcome associations used to guide decisions and strategies in a specific context. Subregions of the frontal cortex including the orbitofrontal cortex (OFC) and dorsomedial prefrontal cortex (dmPFC) are implicated in rule learning, although changes in structural connectivity underlying rule learning are poorly understood. We imaged OFC axonal projections to dmPFC during training in a multiple choice foraging task and used a reinforcement learning model to quantify explore–exploit strategy use and prediction error magnitude. Here we show that rule training, but not experience of reward alone, enhances OFC bouton plasticity. Baseline bouton density and gains during training correlate with rule exploitation, while bouton loss correlates with exploration and scales with the magnitude of experienced prediction errors. We conclude that rule learning sculpts frontal cortex interconnectivity and adjusts a thermostat for the explore–exploit balance. 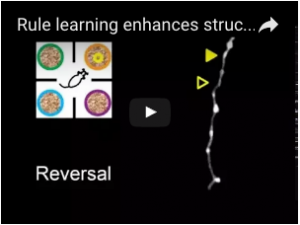 Review: Between the Primate and “Reptilian” Brain: Rodent Models Demonstrate the Role of the Corticostriatal Circuits in Decision Making

Decision making can be defined as the flexible integration and transformation of information from the external world into action. Recently, the development of novel genetic tools and new behavioral paradigms has made it attractive to study behavior of all kinds in rodents. By some perspectives, rodents are not an acceptable model for the study of decision making due to their simpler behavior often attributed to their less extensive cortical development when compared to non-human primates. We argue that decision making can be approached with a common framework across species. We review insights from comparative anatomy that suggest the expansion of cortical-striatal connectivity is a key development in evolutionary increases in behavioral flexibility. We briefly review studies that establish a role for corticostriatal circuits in integrative decision making. Finally, we provide an overview of a few recent, highly complementary rodent decision making studies using genetic tools, revealing with new cellular and tempo- ral resolution how, when and where information can be integrated and compared in striatal circuits to influence choice.

Lee AM et al. Between the primate and ‘reptilian’ brain: Rodent models demonstrate the role of corticostriatal circuits in decision making. Neuroscience (2015), http://dx.doi.org/10.1016/j.neuroscience.2014.12.042

Review: Between the Primate and “Reptilian” Brain: Rodent Models Demonstrate the Role of the Corticostriatal Circuits in Decision Makingwebmatr0n2015-01-31T21:27:19+00:00

In changing environments, animals must adaptively select actions to achieve their goals. In tasks involving goal-directed action selection, striatal neural activity has been shown to represent the value of competing actions. Striatal representations of action value could potentially bias responses toward actions of higher value. However, no study to date has demonstrated the direct effect of distinct striatal pathways in goal-directed action selection. We found that transient optogenetic stimulation of dorsal striatal dopamine D1 and D2 receptor–expressing neurons during decision-making in mice introduced opposing biases in the distribution of choices. The effect of stimulation on choice was dependent on recent reward history and mimicked an additive change in the action value. Although stimulation before and during movement initiation produced a robust bias in choice behavior, this bias was substantially diminished when stimulation was delayed after response initiation. Together, our data suggest that striatal activity is involved in goal-directed action selection.